Swami Vivekanand was born Narendra Nath Datta to Vishwanath Datta and Bhuvaneshwari Devi, in Kolkata on 12th January, 1863. He was celibate while practicing penance and austerity. Vivekanand was an ardent devotee of Kali Maa and adapted to Sanyasi Jivan at a very young age. He was able to Dhyan and practice Samadhi, leaving and entering his body at will. He took final samadhi at the Belur Mutt, on July 4, 1902. Vivekananda was a great leader in revolutionizing youth of colonial India, he reignited the passion for love of India and was the most popular icon among youth due to his thoughts and speeches. He gave the slogans of Bharat Mata and Bharat Mata ki Jai to invoke pride among Indians. He was bluntly honest and had deep insightful knowledge on understanding mindset and behavior of a person whomever he met personally. After his speech in Chicago, 1983, he became one of the most popular preachers among youth of america of that time.

In latest survey, among contemporaries, Swami Vivekanand is the most inspirational youth icon of the Bharat even today. Culture of a country is defined by the thoughts of his great leaders and it forms the character of a youth.

To uplift the social and financial status of its members by inculcating saving habits amongst them through the spirit of co-operation.
To establish and become the pioneer in co-operative movement by ways of high quality standards, customer centric, service driven catering to the future of India.

Co-operative sector in India today need access to enterprise class technology that supports computing demands in the most cost effective manner possible. Keeping in mind the data security factor and on time service demand, we have hosted our application in multitier cloud server to ensure best online banking services. Not only that, we have built our own state of the art data center to ensure low cost, low risk high speed, process-led implementation. 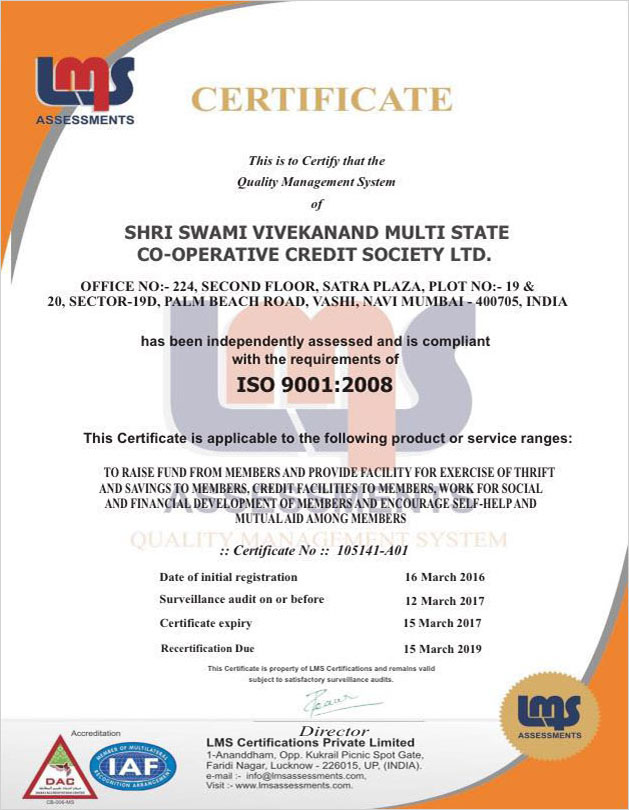